Since the conflict began in March 2011, Syria’s cultural heritage has been at the forefront of the conflict. Used by both sides, many sites serve their age old purpose as castles once again provide protection, and abandoned cities are reoccupied as shelters for homeless refugees. The trade in looted Syrian antiquities is estimated at $2 billion. According to others, such as Time World Magazine, looted antiquities are being traded for guns, but for some, in a country where the economy is in trouble, many are without jobs and food and fuel prices are soaring, looting is the only means to support themselves. Whilst attacks have clearly been perpetrated by all sides in this conflict, the extent of the damage to the sites, and the ultimate responsibility, is extremely hard to identify and will not be attempted here. It should be noted that a lot of the information which is available is not verified. Heritage for Peace do publish newsletters collating unverified reports about the damage, actions taken to protect heritage, and other information of interest, available here. Many of these damage reports are verified by the Syrian Heritage Initiative of the American Schools of Oriental Research, available on their website here. For many sites, all that can be said is that damage has occurred: the true extent may not be known for years, if ever. In addition to the different organisations who try to follow the damage to Syrian heritage, the Directorate-General of Antiquities & Museums (DGAM) in Damascus also monitors the damage: an interactive map and many reports are available from their website.

“…I remember how we would go sometimes to pray and other times with visitors. We would drape the long black abayas over our street clothes and cover our hair. We would laugh and take pictures of each other in the courtyard while old men recited verses in a corner and pigeons flew under the arches. It was a place to connect to your history, to your identity and to tell others, who were not from Aleppo: “This is where we are from. This is who we are.” This is where you come to face your roots. It was a place that existed forever, a place we thought would exist long after we were gone. But we were wrong…” (Amal Hanano on the damage to the minaret of the Umayyad Mosque, Aleppo, Lessons from the Minaret, 2013)

As the conflict has continued, many mosques across Syria, old and new, have become targets for both sides. One (unverified) report suggests many hundreds are now damaged or destroyed. For example, the al-Omari Mosque became a focal point of protests in Daraa. The mosque was built by Omar Ibn Khattab and dates to the 8th century. According to Human Rights Watch “On March 18, following the Friday prayer, several thousand protesters marched from al-Omari Mosque in Daraa calling for the release of the children and greater political freedom, and accusing government officials of corruption” [1].  Protests continued, and the mosque became a rallying point and makeshift hospital for the protests.  Between 23-25 March, the mosque was shelled and stormed [2]. It, and numerous others, remained a rallying point for protests. The al-Omari mosque was shelled at least twice more: photos and a video  published by the Association to Protect Syrian Archaeology show extensive damage. 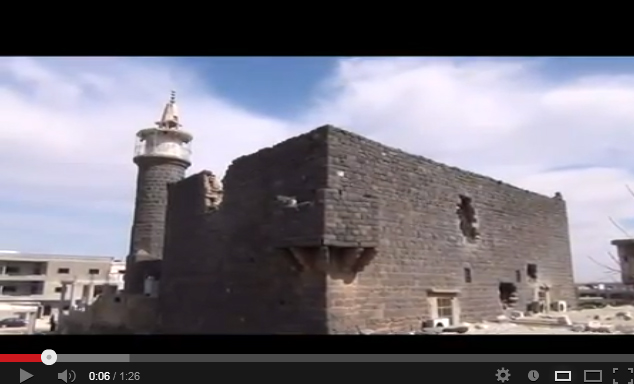 Al-Omari Mosque after shelling, March 2013 (to watch the video click on the image above).

Other religions too have seen their buildings destroyed and looted – examples include the ancient synagogue of the Prophet Elijah in Jobar, Damascus, which was shelled and some of its fixtures looted in February 2013. Many ancient churches and monasteries have also been damaged, including the Church of Um al-Zenar in Homs, the site of which dates back to 59 AD although reconstruction work has been undertaken by local people, there and at several other sites.

The Ancient City of Aleppo, the oldest part of which is a 5000 years old temple, has been at the centre of the fighting almost since it began. The Ancient City is a part of the identity of the Aleppians and the soul of the city: now large swathes of it are gone – UNESCO estimates 60% is destroyed. Parts of the historic souk were engulfed in a fire in 2012, the ancient citadel is pocked by shellfire, and the great Umayyad Mosque, considered one of the holiest places of Islam, has been extensively damaged in the fighting. Part of the outer wall was destroyed as combatants blasted a hole to gain entry, the inner walls are pocked by gunfire, at least one of the galleries and the library – home to thousands of rare ancient manuscripts – are burned and gone, and in April 2013 the ancient minaret was destroyed. 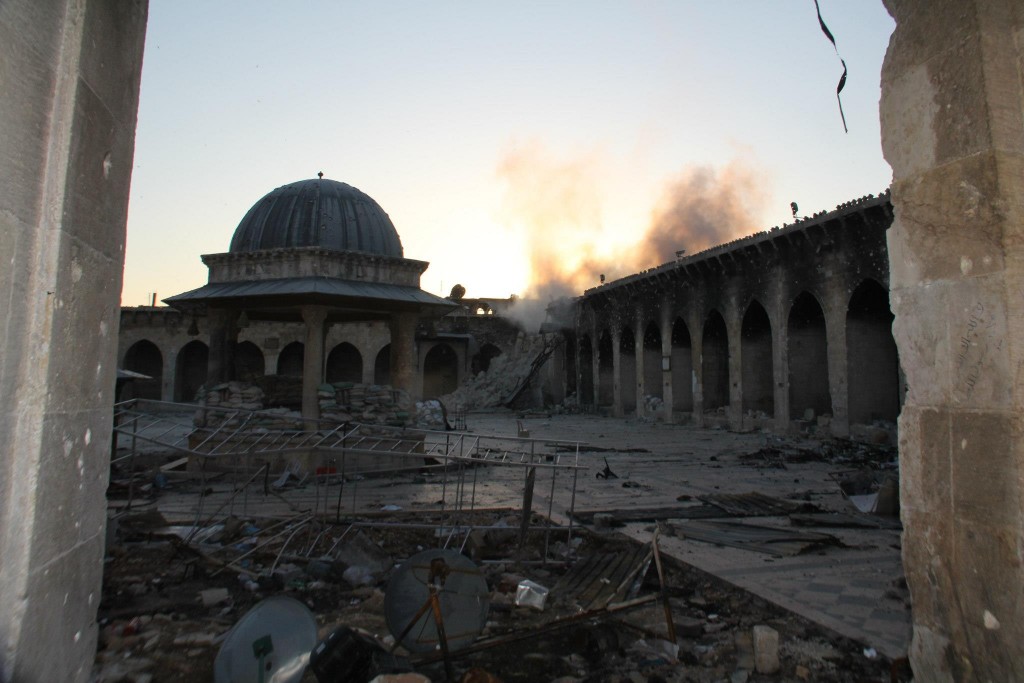 The remains of the minaret of the Umayyad Mosque, Aleppo April 2013 (Lens of a Young Halabi).

The ancient city of Bosra, once capital of the Roman province of Arabia, Palmyra, the beautiful desert oasis trading city, and the Ancient Villages of Northern Syria – only added to the World Heritage List in 2011 –  have all been damaged by gunfire, shelling and looting. Even the walls of the ancient castle of Crak des Chevaliers has been damaged by shellfire, as shown in pictures shared by the Association to Protect Syrian Archaeology and others.

Tentative world heritage sites fare no better – imagery available on Google Earth shows extensive looting at Apamea (Afamia), and the columns were damaged by shellfire.  The New York Times recorded looting at the ancient city of Ebla, and photos have also been circulated of looting at many other sites.

Looting at Apamea, 4 April 2012. Left: Extent of the looting. Right – close-up view along the colonnade (DigitalGlobe image from Google Earth)

As the scale of the looting of sites begins to feel reminiscent of Iraq, perhaps the one bright spot is the museums. Whilst some items have been taken, most collections are apparently safe. The most famous stolen object is an 8th century gold statue from the Hama museum, which was circulated by Interpol but not yet recovered. Other stolen items include some mosaics, some statues, a coin collection and a collection of educational and scientific instruments. Many of the museums are in cities where the fighting is intense – so far, however, other than broken windows and slight structural damage, few have been seriously harmed. The museum of Ma’aret al-Numan – home to many fine mosaics – has been used as a barracks and was damaged in air raids the site museum at Dura Europos was heavily looted (but contained only replicas); and the Museum of Popular Traditions has been heavily damaged, in addition to several others. Vewry few have been looted. It should be noted that the extent of damage to Syria’s museums is one of the areas which is hardest to verify.

The Syrian Antiquities authority – the Directorate General of Antiquities and Museums – are working to safeguard their heritage.  They have held emergency workshops with key partners, such as the governments of Jordan and Lebanon – countries which are often key intermediaries for looted objects.  Staff have undergone training in partnership with UNESCO and ICOMOS on protecting cultural heritage in conflict.

Most objects in Syria’s 33 museums have been taken into safe storage, leaving only the most bulky items which cannot be moved.   Security has been increased – alarm systems were installed in museums and citadels; the number of archaeological guards has been increased, and the role of archaeological police has been activated; and the local communities were mobilized to protect heritage in their areas, cities and villages.  In particular they are keen to work with the local communities to protect their heritage.  In an interview in October 2012 “with Syria Times reporter, Butheina al-Nounou, Dr. Abdulkarim added that it is an established fact that without the support of the local communities to all initiatives set to realize the real value of their heritage, all efforts made by official bodies concerned will remain inadequate to achieve the desired objective”.

“…They say that people make their cities. But if you are from Aleppo, one of the oldest cities in the world, the city has made you much more than you have made it. So when pieces of our history are destroyed one by one, pieces of us are lost, fragment by fragment…” (Amal Hanano on the damage to the minaret of the Umayyad Mosque, Aleppo, Lessons from the Minaret, 2013)

To this end, they have started the campaign My Syria, which aims to raise awareness of the importance of their heritage amongst the Syrian people, using advertisements and street billboard, and 15-30-minute TV and Radio spots to promote the basic theme of the national campaign. Coordination will be maintained  with journalists in both newspapers and electronic journals to publish introductory and informative articles, and work will also focus on directing staff in different directorates of Syrian antiquities to cooperate with volunteers and advocates of antiquities preservation, along with opinion leaders, cultural and intellectual elite, and religious figures in rural and urban areas to promote the Syrian heritage protection campaign. Brochures and other publications will also be distributed in universities and schools for this matter.

Only time will tell how successful the campaign will be.  One thing is certain, however.  Karim is correct – without the support of the Syrian people to protect their heritage, all measures will ultimately be inadequate.  In this however, there is hope.  Right from the start, activists were uploading videos – some even with guided tours – of the damage to their heritage and calling for help. NBC ran an article on how the Syrian’s are risking their lives to protect their sites.  Le patrimoine syrien archeologique en danger shared a video showing the efforts of local people to protect their heritage.  After the shelling of the Umayyad Mosque minaret, an appeal was circulated begging that the fallen stones be saved for the eventual reconstruction efforts.  Within days, a video was shared by the Association to Protect Syrian Archaeology of local soldiers, pledging to do just that.  And ultimately, if the Syrians did not care, we would have no information – every tweet, every photo taken, every video shared demonstrates just how deeply they do care and how they, too, want a future in which their heritage continues to play a part.

The following organisations monitor damage to Syrian cultural heritage.  On their webpages more information can be found about the sites described here, and many others (Those underlined are dedicated exclusively to Syrian heritage).