Specific demographic data for Syria is unreliable. Some minority groups are defined primarily by religion, others by ethnicity, and some are relatively recent immigrants. Many of them can also be found in neighbouring countries. Physical and human geography have been major determining factors in Syria’s social fabric: city, desert, mountain and sea. Until the present century, social divides between town dwellers, peasants and Bedouin, and the conflict between the latter two, were almost as important as religious differences. 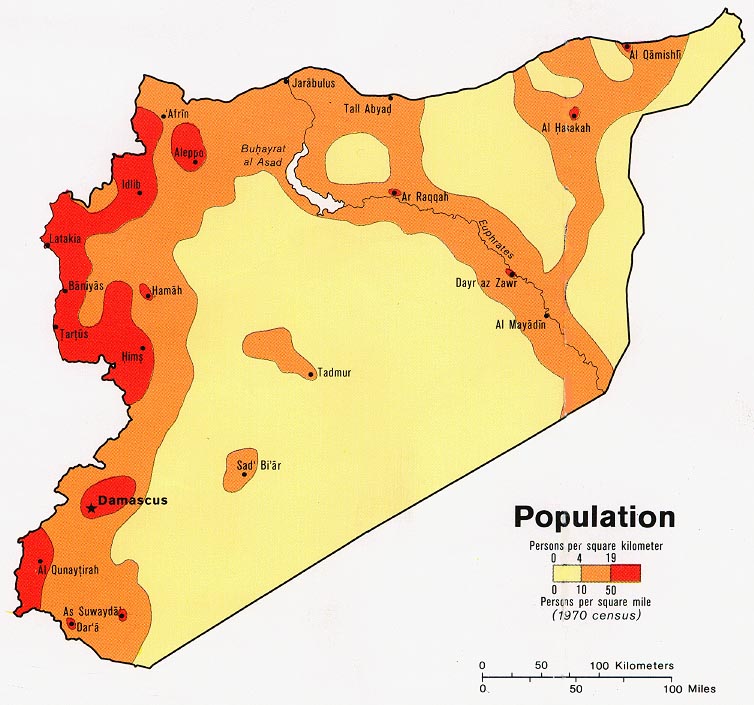 Syria’s population was estimated at 20.8 million (World Bank,2011) and was growing at an estimated rate of 2.4 percent in 2004. The annual growth rate from 1990–2002 was 2.6 percent. About 52 percent of the population was urban as of 2002, with a growth rate of 3.1 percent. Syria is one of the most densely populated countries in the Middle East (57 people per square kilometer in 1986 and about 363 per square kilometer in 2004), but there are significant  regional variations. The population is concentrated along the coast in the west, in the south around Damascus, and in the Euphrates River Valley in the northeast. According to the  UNRWA (end of 2012) 499,189 Palestinian refugees   and 1.2 million Iraqi refugees since the U.S.-led invasion of Iraq in 2003 are believed to reside in Syria. In addition, Syria before the crisis had already some 170,000 internally displaced people, mostly from the Golan Heights. An estimated 40,000 people remain in the Golan Heights, including about 20,000 Arabs and 20,000 Israeli settlers.

Of course, since the crisis the distribution of the population looks totally different. Of the Syrian population, around 3 million have fled to neighbouring countries as a result of Syria’s conflict (end of August 2014, UNHCR). Further according to the UNHCR almost half of all Syrians have now been forced to abandon their homes and flee for their lives. One in every eight Syrians has fled across the border, fully a million people more than a year ago. A further 6.5 million are displaced within Syria. Over half of those uprooted are children (for the latest figures see the UNHCR website).

The number of individual languages listed for Syria is 17. Of these, 16 are living and 1 is extinct. Of the living languages, 4 are institutional, 2 are developing, 4 are vigorous, 5 are in trouble, and 1 is dying.Arabic is the official language spoken by 89% of the population. Several modern Arabic dialects are used in everyday life, most notably Levantine in the west and Mesopotamian in the northeast. Kurdish (in its Kurmanji form) is widely spoken in the Kurdish regions of Syria.Armenian and Turkish (South Azeri dialect) are spoken among the Armenian and Turkmen minorities.Aramaic was the lingua franca of the region before the advent of Arabic, and is still spoken among Assyrians, and Classical Syriac is still used as the liturgical language of various Syriac Christian denominations. Most remarkably, Western Neo-Aramaic is still spoken in the village of Ma`loula as well as two neighboring villages, 35 miles (56 km) northeast of Damascus. Many educated Syrians also speak English and French. 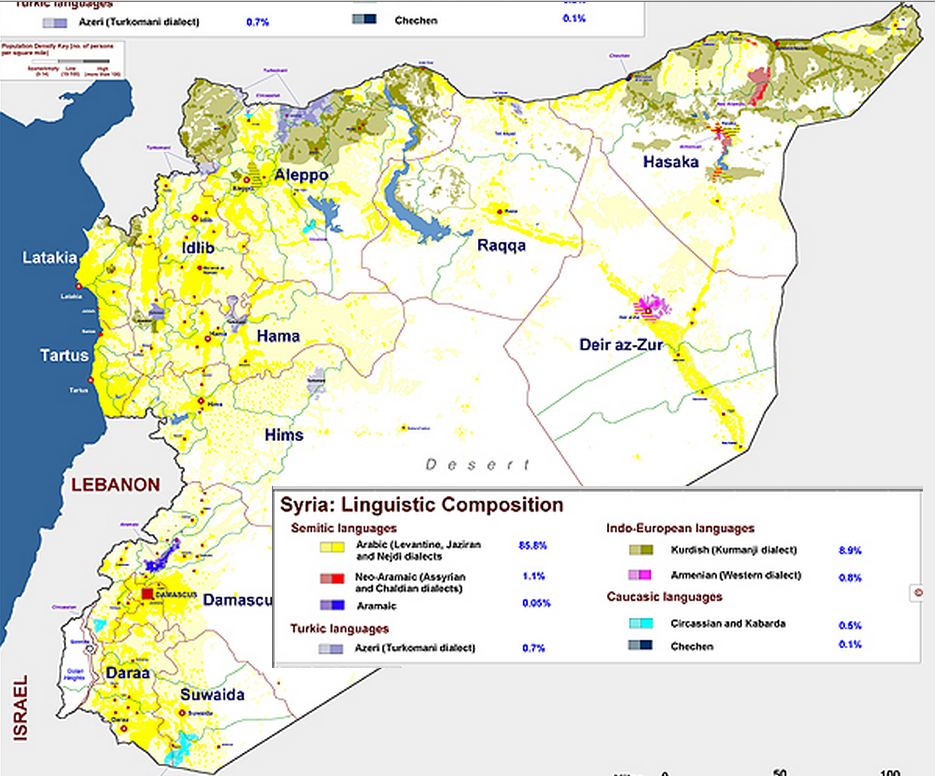 The Syrian population forms a mosaic of cultures and ethnic groups, which has been building up for thousands of years. Their diversity is an essential part of the nation, and was in the past even greater than it is today. While in the mountain ranges religiously ‘dissident’ communities were able to hold their own against Muslim or Christian orthodoxy, a more cosmopolitan Mediterranean trading culture developed on the coastline which had as much in common with other seafaring cultures of the Mediterranean as it had with its hinterland.

Of a Jewish population that numbered around 40,000 before Israel’s establishment in 1948, nearly all have emigrated and only around 100 to 200 Jews remain in Syria today. They are concentrated in Damascus and Aleppo. Jewish settlers moved into the Golan Heights after 1967, and Israel annexed it in 1981, but the United Nations refused to recognize the new status.

Around 1.5 million Kurds form Syria’s largest ethnic minority. About a third of them live in the foothills of the Taurus Mountains north of Aleppo, and an equal number along the Turkish border in the Jazirah. A further 10 per cent can be found in the vicinity of Jarabulus northeast of Aleppo, and from 10-15 per cent in the Hayy al-Akrad (Quarter of the Kurds) on the outskirts of Damascus.

Armenians, Circassians and Turkomans are smaller ethnic minorities. Armenians of various Christian denominations live mainly in Aleppo, but also in Damascus and the Jazira. Several thousand Circassians live mostly in Damascus. They are descended from refugees who fled Russian invasion of the North Caucasus in the latter half of the nineteenth century and settled mainly in the Jawlan (Golan). Here they came into conflict with the Druze. They were mobilized as auxiliary forces against the Druze in 1896 and 1910 and by the French in 1925. 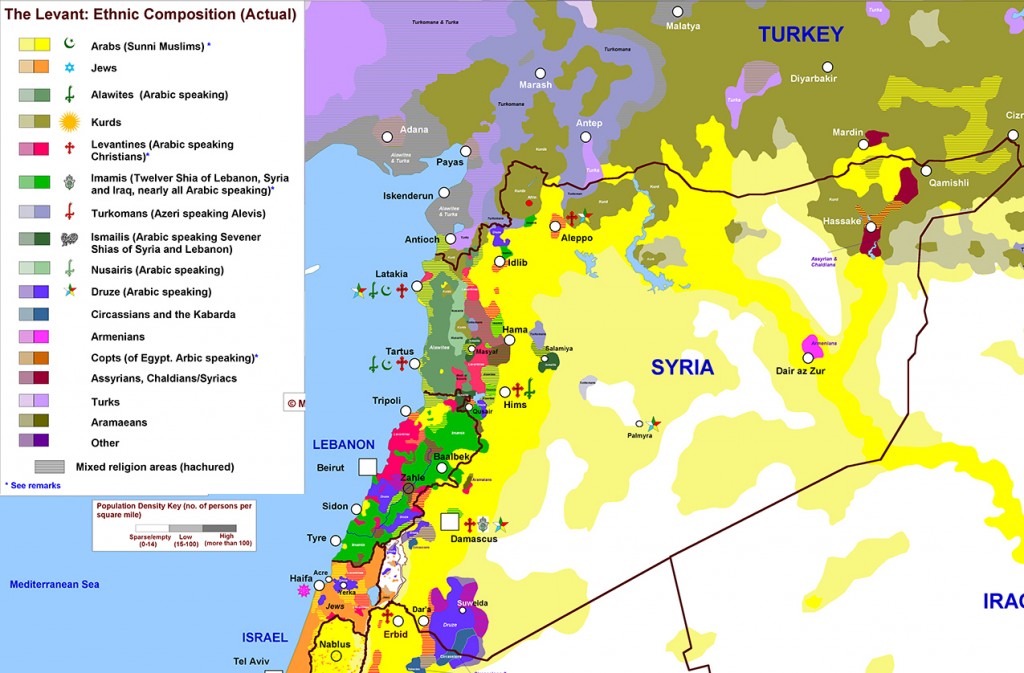 The Levant: Ethnic Composition. Each color represents an ethnic or religious group. (Michael Izady / The Gulf/2000 Project at Columbia University)

In 1967 over half the Circassian community lost their homes when Israel captured the area. About half the Circassians are concentrated in the southwestern Hawran Province. Al-Qunaytirah was viewed as their provincial capital that was destroyed during the October 1973 war between Israel and Syria, and they later moved to Damascus. Given that Circassians served as troops with the French during the mandate period, many Syrian Arabs are somewhat distrustful of them, although relations are much improved these days. Little information is available on ethnic Turkomans in Syria, who for the most part are Sunni Muslims, and many of whom have assimilated into Arab culture. For more see…

The vast majority, 74%, is Sunni Muslim, 16% other Muslim (including Ismailis, Shiites, Alawites and Druze), 10% Christian (various denominations, primarily Greek and Armenian Orthodox). In addition there are small Jewish communities in Damascus, Al Qamishli and Aleppo.

This demographic mosaic is complicated by divisions within many of these groups. For example, Sunni Arabs are not as demographically dominant as they might seem. To begin with, the basic numbers are disputed; Alawites may constitute as much as twenty percent of Syria’s population. The Sunni population also includes many non-Arabic speakers, including most Kurds–and the Kurdish population may form fifteen or even twenty percent of the total.

There are a small number of Yezidis in Syria, ethnic Kurds who practice a 4,000 year old religion (see Iraq). Their numbers have declined over the years largely due to assimilation into Islam. One community is in Jabal Sim’an and the Afrin valley in north-west Syria, and dates back at least to the twelfth century. A slightly larger group, composed of refugees mainly from southern Turkey but later also some from Iraq during the 1920s and 1930s, is located mainly around Hasaka in the Jazira, north-east Syria as well as Aleppo. 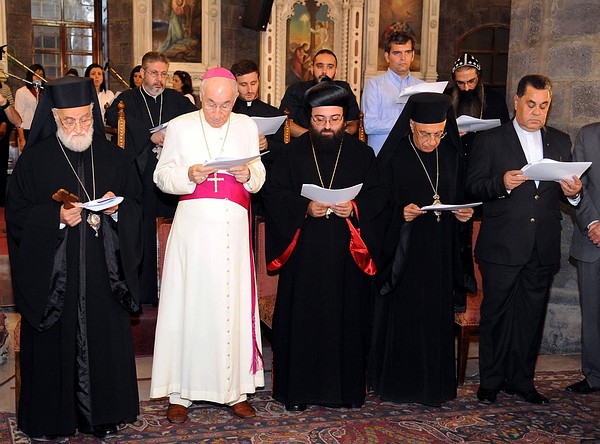 Syrian Melkite Greek Catholic Patriarch Gregory III Laham (L) and other church clerics lead a prayer vigil for peace at the Lady of Dormition, the Melkite Greek Catholic patriarchal cathedral in the Old City of Damascus, on September 7, 2013, heeding a call from the Vatican, as the US pressed for a military strike on Syria. (Credit: AFP/Getty Images)

Alawi Muslims are Syria’s largest religious minority. They live mainly in the Nusayri Mountain range in the coastal part of north-west Syria, but also on the inland plains of Homs and Hama. Smaller numbers of Ismaili Muslims live for the most part in the coastal mountain range, south of the main Alawi areas. Twelver Shias live in a handful of communities near Homs and to the west and north of Aleppo.

Druze are located primarily in Jabal Druze on the southern border abutting Jordan. Isma’ilis live mainly in Salamiya, east of Hama. Grouping the heterodox Alawites and Druze as “other Muslim” also understates Syria’s diversity. Many Muslims – perhaps most – do not reckon Alawites as members of the community of the faithful. The Islamic standing of the Druze religion is still more questionable, as the Druze generally regard Jethro (father-in-law of Moses) rather than Mohammed as their main prophet. But the Druze conceal their beliefs so extensively—even from the bulk of their own population—that it is difficult to say what they actually believe. Syria’s half-million strong Druze community may constitute only two and a half percent of the country’s population, but the Druze have long formed a politically capable and militarily potent congregation. As the Wikipedia puts it, “The Druze always played a far more important role in Syrian politics than its comparatively small population would suggest.” 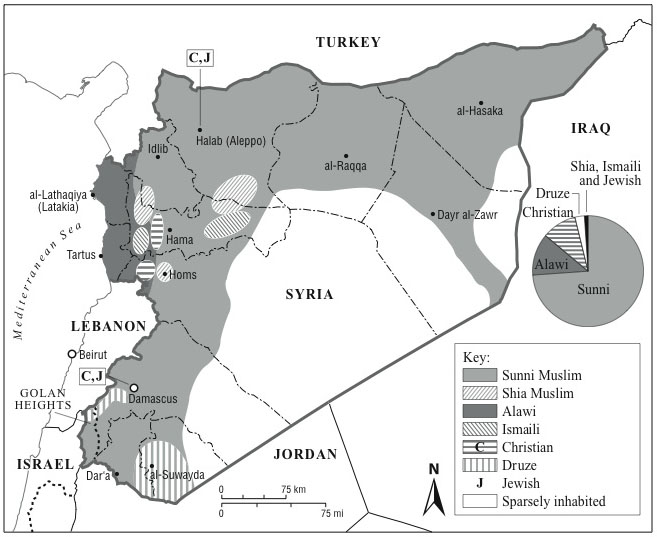 Greek Orthodox Christians and Greek Catholics are concentrated in and around Damascus, Latakiya and the neighbouring coastal region. Syriac Orthodox Christians are located mainly in the Jazira, Homs, Aleppo and Damascus and Syrian Catholics in small communities mainly in Aleppo, Hasaka and Damascus. There is a small community of Maronite Christians mainly in the Aleppo region. The Maronite community is a surviving remnant from before the majority sought safety in Mount Lebanon in the sixth century. It has maintained ties to Rome since the twelfth century, and the liturgy is in Syriac.

Christian numbers are also likely under-reported, as they seldom include the hundreds of thousands of Iraqi Christian refugees living in the country. Besides the Christians are divided into eleven main sects, including the Greek Orthodox, Melkite, Syrian, Maronite, Chaldean, Armenian, and Catholic denominations.

Next, the Sunni Arabs range from the highly pious to the very secular and are divided between an urban elite and the rural masses that traditionally have had diverging political loyalties. Like many countries in the Middle East, the sharpest divide may not so much be religious or ethnic as it is ideological and existential, pitting Muslims who want to align politics with religion against those who wish to keep them apart.