The striking feature of the Syrian climate is the contrast between sea and desert. A semiarid steppe zone extends across about three-quarters of the country between the humid Mediterranean coast in the west and the arid desert regions to the south and east. The steppe experiences fairly abundant rainfall, with annual precipitation ranging between 750 and 1,000 millimeters, mostly falling between November and May. Annual mean temperatures range from  7.2° C in January to 26.6° C in August. The area east of the Anti-Lebanon Mountains, including Damascus, has precipitation averaging less than 200 millimeters a year and temperatures ranging from 4.4° C in January to 37.7° C in July and August.

Syria’s environment is in a dire state: deforestation, overgrazing, soil erosion, desertification, lack of (drinking) water, water pollution from raw sewage and industrial waste (like petroleum refining waste) are just a few of the problems. The SNEAP report states (1): ‘For a long time, Syria was renowned for its very diverse geographic and climatic features, which provided a variety of environments suitable for a wide range of plant and animal species, and a great genetic diversity within these. However, as consequence of natural habitat destruction, accompanied by population growth and associated human activities, urban development and agricultural expansion, many categories of biological and genetic resources are being depleted and endangered.’ 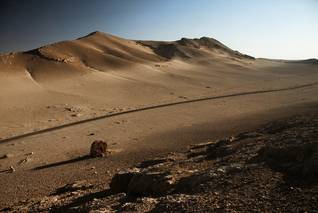 Reports are disconcerting regarding issues such as water resources and quality, air quality, biodiversity, and waste. Since 2003, some projects (reforestation, wastewater treatment, sustainable use of resources, protected areas) have been initiated. However, little progress has been made. Finances are a permanent problem. From 2003, environmental issues have been dealt with by officials of the Ministry of Local Administration. In April 2009, a new Ministry of Environment was established. But the work to protect the environment conflicts with the interests of the industrial sector.

Syria’s vegetation can hardly be called rich, as its soil is extremely arid. The only fertile soils are to be found along the banks of the rivers, and – astonishingly enough – in the rock-strewn south-western plain called Hawran. According to the Ministry for the Environment, 45 percent of the lands consists of pastures, 32 percent of fertile lands, 20 percent of arid lands and only 3 percent of forests (as compared to 32 percent at the beginning of the 20th century). 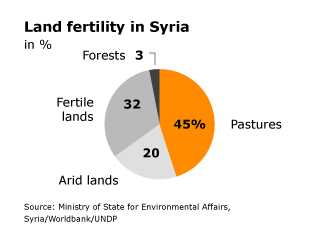 Yew, lime, and fir trees grow in what is left of the forests on the mountain slopes. Scrubs and scrubby underbrush cover many slopes. Trees do not grow on the steppe, except for some sparsely distributed hawthorns. In early spring, a variety of (flowering) plants covers the land. From June, however, the weather is too dry for plants to survive.

The Euphrates River, originating in the mountains of Turkey and flowing diagonally southeastward across Syria into Iraq, is Syria’s longest and most important river, providing 80 percent of Syria’s water resources. Its left-bank tributaries, the Balikh and the Khabur, are both major rivers also originating in Turkey, but its right-bank tributaries are small seasonal streams called wadis. The Barada River, rising in the Anti-Lebanon Mountains in the southwest and disappearing into the desert, creates the Al Ghutah Oasis, the verdant site enabling Damascus to prosper since ancient times. In the northwest, the Orontes River irrigates the Al Ghab depression, a fertile, intermountain plateau region east of the coastal mountains.

Source of the Euphrates and the Tigris River that flow inside Turkey, Syria and join inside Iraq and finally pouring into the Persian Gulf. Historically, Euphrates used to be the border between Persia and the West (Iranian Historical Photographs Gallery).

There are not that many wild animals left. Some wolves, hyenas (endangered species), foxes, badgers, wild boar, and jackals still live in remote areas. There are also deer (endangered species), bears, squirrels, gazelles, and jerboas (nocturnal rodents). Birds are relatively rare. Syria is on the route of migrating birds, but according to the SNEAP report (1), ‘as a consequence of natural habitat destruction, due to the population growth and associated human activities, urban development and agricultural expansion, many categories of biological and genetic resources are being depleted and endangered’. Many animals – including the camel and the wild goat – have become endangered species. For Nature Reserves go to… 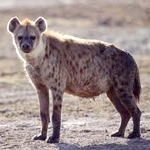 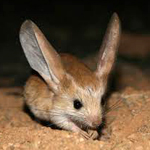