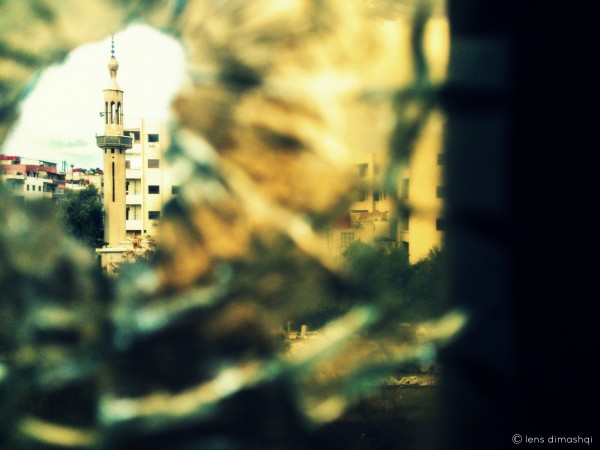 By Young Lens of Damascus (one of the citizen journalist organizations) – calling himself  Lens Young Dimashqi. Visit his Facebook or his Website.

Cultural heritage forms a deep and fundamental part of the identity of people and nations.  It is expressed in intangible social customs, traditions and rituals, and unique physical objects, monuments and places.  It helps define where we have come from and who we are.  It demonstrates our common humanity through our shared past, and as such it is a means for peace.  In conflict, however, it is often one of the parts of a nation most quickly damaged, and hardest to repair.

In the recent past, those cultural institutions that managed to save their monuments, archaeological sites and collections in conflict situations usually did so because they were able to predict the violence. Despite often difficult local circumstances, they could prepare themselves to face the conflict and deal with the repercussions.

However, as conflicts have escalated, they often move beyond the resources of those tasked to cope with them, leaving staff, institutions, and the heritage in their care, isolated. Heritage for Peace (Syria) was created to assist our colleagues working in conflict situations to protect their heritage to the best of their, and our, abilities.  It matters not just for them, and for their country, but for all of us.  It is through the past we may find support for future peace.

This website contains information on our mission and objectives, and how we hope to achieve them.  You will also find information on cultural heritage generally, and Syria and her wonderful heritage specifically, and on why it matters not just to them, but to all of us.

…That ignorance of each other’s ways and lives has been a common cause, throughout the history of mankind, of that suspicion and mistrust between the peoples of the world through which their differences have all too often broken into war;

Constitution of UNESCO, adopted in London on 16 November 1945